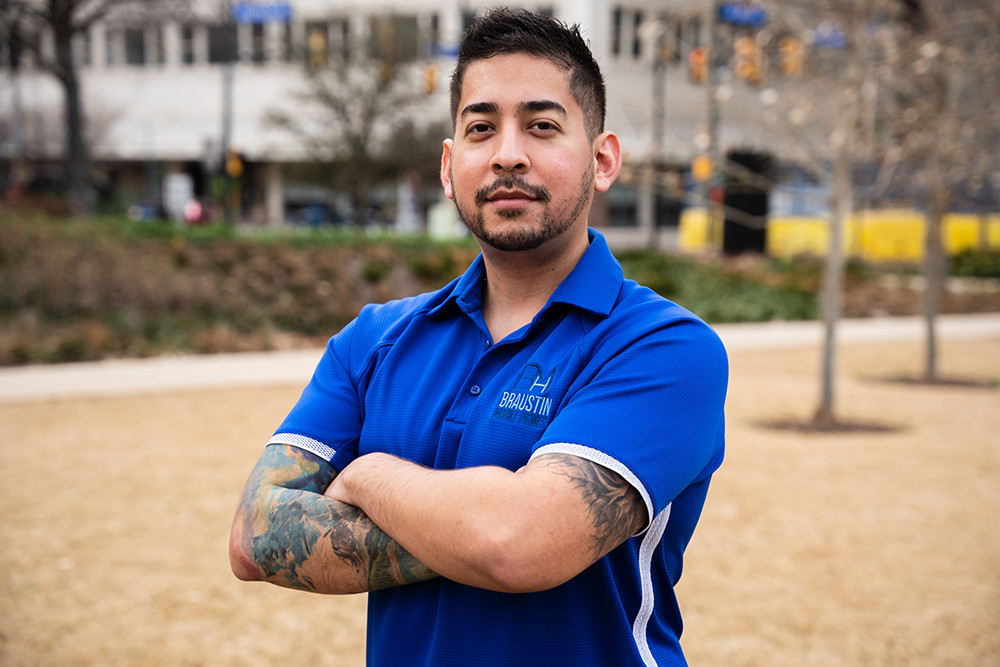 Intro: Meet John Wondra! He serves our customers as a Housing Consultant, and has been with Braustin Homes since August of 2018. For about three years now, John has been an integral part of our team, and we are so excited to share his experience thus far.

John Wondra: My name’s John Wondra, born and raised in San Antonio, Texas. I’m in sales. I’m the guy on the phone, helping families go from the very beginning of asking how it all works and the pricing, to welcoming them to do the final call of saying, “Hey, congratulations! You get to move into your house.”

What did you do before joining Braustin?

John Wondra: Before Braustin I worked for, actually this building that we’re in right now, Geekdom, a co-working space. I was their Events Manager amongst 10 other roles, and that’s actually how I got to find Braustin.

What was that experience like when you actually first heard about Braustin?

John Wondra: Honestly, I was like, “Mobile homes? Cool… Anyways, going to go play with this drone over here.” I didn’t know anything about what they were doing. I just knew that these guys never left their desks, and at Geekdom we’re a part of a community and the whole thing is to get everyone to work together and hang out. But, these guys were never to be found.
It’s my job to help build the community, so it was funny having to kind of pull them and find ways to trick them with free food and tacos to hang out with us. They would come down for that. I’d look and they’d disappear with all these tacos in their hands and get back to their phones.

This is a tech company, but they sell mobile homes. What the heck are they even doing here?

That day that I sat down with Alberto just blew my mind.

I knew right then and there, I wanted to be a part of it. It wasn’t just about selling mobile homes, it was about changing what’s never been done in the industry – as far as even explaining the things that these families are going through. If it wasn’t for Braustin, they would still be getting tricked into the sales of things and the sales games and gimmicks, and people just really taking advantage of them.
And by what Braustin is doing, I mean, it’s not only a “cool tech company” and doing things remote and online, but it’s truly about helping the families:

2. Giving them Honesty and Transparency (which never really existed prior to Braustin.)

People always say like, “What got you into mobile homes?”

Honestly, I never saw myself ever selling mobile homes, but it’s not even really about selling the mobile home.

It’s about helping the people.

Being able to see or hear families that never thought they would ever have a home to theirselves or a bedroom for each one of their kids, versus everyone in the same room, and knowing that I work for a company that was able to make that impact and change without even meeting them, that’s incredible.

Is there a particular customer that you’ve worked with that kind of sticks in your mind?

John Wondra: Actually, I mean, there’s quite a few. One of the families I was helping, they were told “NO” everywhere they went.

Told them, “Oh, sorry. You can’t get a home.” They of course ran their information right off the bat, and they were just trying to see if they’re worth their time, so they can move on to the next.

And to them, they weren’t.

Just like, “Sorry, your score is low,” or whatever. They don’t want to put in the extra effort. So they just gave us the last shot before giving up. That’s the big difference, it’s not up to us to say “NO”, it’s up to us to find the answers and explain why, which no one had done. So it’s like at the very least, you’re not going to get a “NO,” you’re going to get a “hey, you weren’t approved, but here are the reasons why, and here’s what we can work on.“

Long story short, they did get approved.

There were other ways that we figured out with the bank to where we can make it happen for them. It took a little bit of work, but that’s our job. And they were super delighted to know that they finally heard a YES! I was able to tell them yes and make that happen for them. It’s cool to dive into people’s lives and see how you’re making an impact.

Do you have any hobbies?

John Wondra: I just like doing things out of the ordinary.

I don’t want to say YOLO, but honestly, you think about it, YOLO.

One day I wrote down a list, what are some things that some people will never do in their life, but that are right there and you can always wonder?

Learn how to drive stick: I bought my car off the lot, not knowing even how to drive it home and stalled it all the way to my house, and it was frightening, but I mean, YouTube teaches you everything.
I figured it out.

I bought a motorcycle: I figured like, “Why not?” Right? You only live once.

I went camping by myself in the mountains of Colorado just to do it. I feel like some people, so they’re on their death bed, like, “I wish I rode a motorcycle.” I don’t want to be that guy. I want to say, “I did it.” Skydiving’s next.

John Wondra: We’ll see. I’m terrified of heights. I mean, I like to do magic tricks, pulling change out of thin air, just out of nowhere like that.

Do you have any pets?

John Wondra: I do. His name’s Butters. He’s a little wiener dog. Well, he’s mixed. He’s long-haired and short haired, but he looks like Smeagol.

John Wondra: He’s completely bald, the short-hair part, but then on his head, he’s got the strands of long {hair}. Yeah, it doesn’t look the cutest. I don’t know – people think it looks cute.

I think he looks cute…

So tell us about your flame thrower!

John Wondra: So I like to brag on that I have this flame thrower because most people are like, “Why do you have a flame thrower?”

I have it mounted on my wall in my living room. And I vowed, I’ll never use it. And everyone’s like, “Oh dude, you should use it. How do you not use it?”

Yeah, during the winter storm, I snapped. I took it off. I put the fuel on and I went and I cleared snow out with it, just shooting it in the air in the apartment complex. And believe it or not, apartment complexes don’t really like that too much.

When we figure out a way to consistently visit the Moon or Mars, will you be going?

John Wondra: There’s actually an application, they’re picking random people, like civilians, one or two, in the next couple years to go to the moon and also be a part of the Mars program, I’ve heard.

I believe in aliens. 2024, we’re supposed to be walking on there. End of July, 2021, Elon predicts to have the SN Starship completed with its tower. It’s going to be like the Frost Tower going into the air.

So that’s it: Meet The Team : John Wondra. We would love to chat with you or hear about your experience on our Facebook page or through our Contact Form.