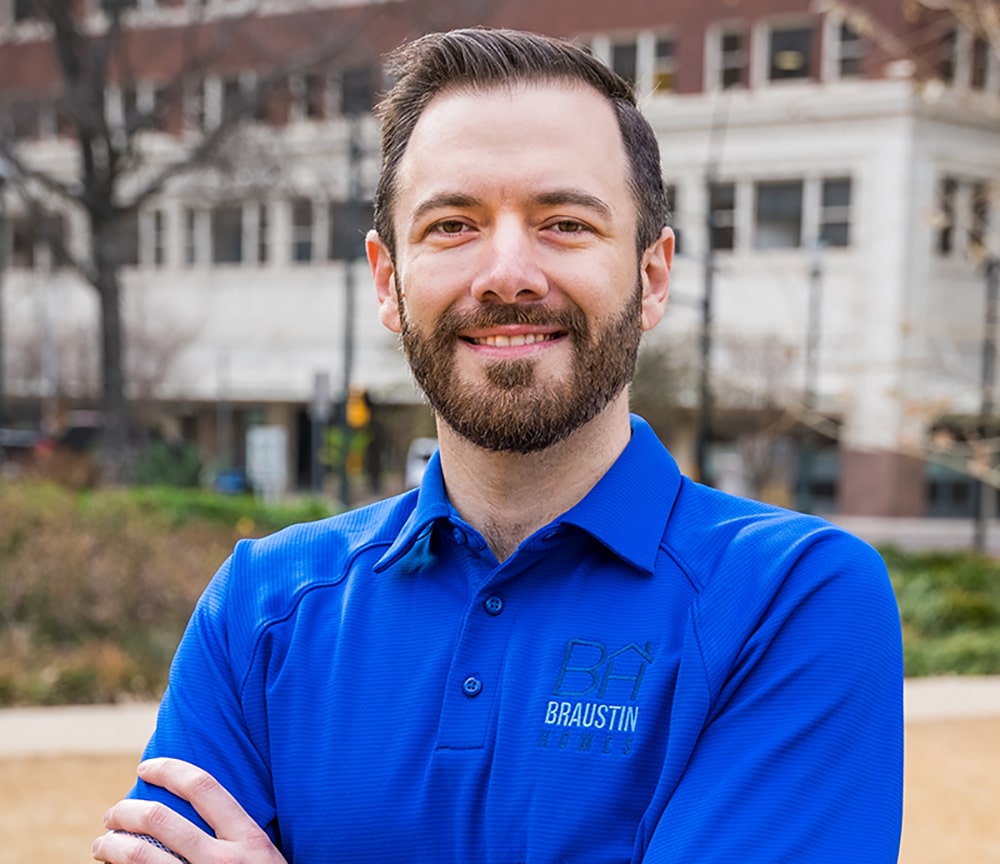 Intro: Meet Mauricio Chacra, formally known as “Mousetrap” on the Doublewide Dudes Podcast! He serves our customers as one of our Sales Leads, and has been with Braustin Homes since January of 2017. For a little over four years now, Mauricio has been an integral part of our team, and we are so excited to share his experience thus far.

Did You have any Nicknames Growing Up?

What do You do at Braustin?

Mauricio Chacra: I lead sales, just talking on the phones with clients. Basically getting them set up into a house, telling them the ins and outs, and everything that it takes to become a homeowner.

What Does a Typical Day for You Look Like?

Mauricio Chacra: I come in, get a nice cup of coffee because that’s the most exciting part about the morning, right? I go through my planner to see what phone calls I’m going to do, take customers’ phone calls that come into our lot. I do a face-to-face video chat with them, and give them all the information they need.

Looking after the team, making sure that people are getting things done and kind of just on the phone pretty much – every day, all day.

Chris Martinez: So Mauricio is my Sales Lead.

He helps push my deals forward, so that way at the end of the day, he and I are both able to help as many families as possible.

“Mauri,” that’s my Fearless Leader – I’m definitely grateful to have “Mauri” on our team.

So You’re One of Two Spanish Speakers on the Sales Team?

Mauricio Chacra: For the longest time before Corey got in, I was the only Spanish speaking representative.

I mean, it definitely adds to the workload only because as you can imagine the people that are looking for a house that speak Spanish – there’s a lot of them out there.

Now that Corey’s here, it definitely helped out in the workload and his Spanish has gotten better. When we first interviewed him and talked about joining the team, we talked in Spanish and it was good.

But then over time I can hear him picking up different terms that I at first didn’t know. Financial terms, whatever you’re just spitting out, he’ll eventually get it. So I think he’s almost 100%.

John and Chris, the guys that don’t speak Spanish, we just say those terms so much that’s all they pick up. So they just walk around the office saying “enganche” or “doble ancho,” it’s the most common words that we say, me and Corey, they’re just spitting out, thinking they know Spanish.

How did Your Career Begin with Braustin?

Mauricio Chacra: I met Jason for the first time in North Star Mall, selling T-Mobile cell phones out of the kiosks – that was in 2008, maybe.

I had left and then Alberto joined there with Jason selling cell phones.

Then he kind of took off, did his own thing and started working at Palm Harbor, the manufactured retailer. And that’s when Alberto started his career.

I joined them in 2015 in the mobile homes and just another setup that we had. Things happened and he started his own business and we kind of jumped on, and we’ve just been doing it ever since!

What do You Love About Braustin?

Mauricio Chacra: Transitioning from the old retailer onto now, it allowed us to essentially create our own destiny without any chains. I think that’s one of the biggest things I love about working here, we just control that.

And then the family environment, obviously with all of us just working together, it doesn’t really feel like I’m going in and working. We’ve worked with some people over time and they don’t feel like strangers.

But for the most part, it’s not coming into work, it’s like coming in with your friends and creating an incredible business. That’s kind of like how my mentality has been through the very beginning.

Do You Prefer the Beach or Mountains?

I like the beach, but skiing or climbing, that definitely just attracts me more.

If I had the choice, I’m going to the mountains every time! And Michelle, my fiance, is like “THE BEACH!” So it’s kind of like talking about vacation, where we should go? I’m like, I already got the camp, and the truck!

Do Y’all have a Honeymoon Planned?

Mauricio Chacra: We do.

We’re thinking about going to a beach. Yeah. Compromise.

Do You have any Hidden Talents?

Mauricio Chacra: Talents, I mean, I can beat box.

(Beat box demonstration and audio included in video linked above.)

So that’s it: Meet The Team : Mauricio Chacra. We would love to chat with you or hear about your experience on our Facebook page or through our Contact Form.