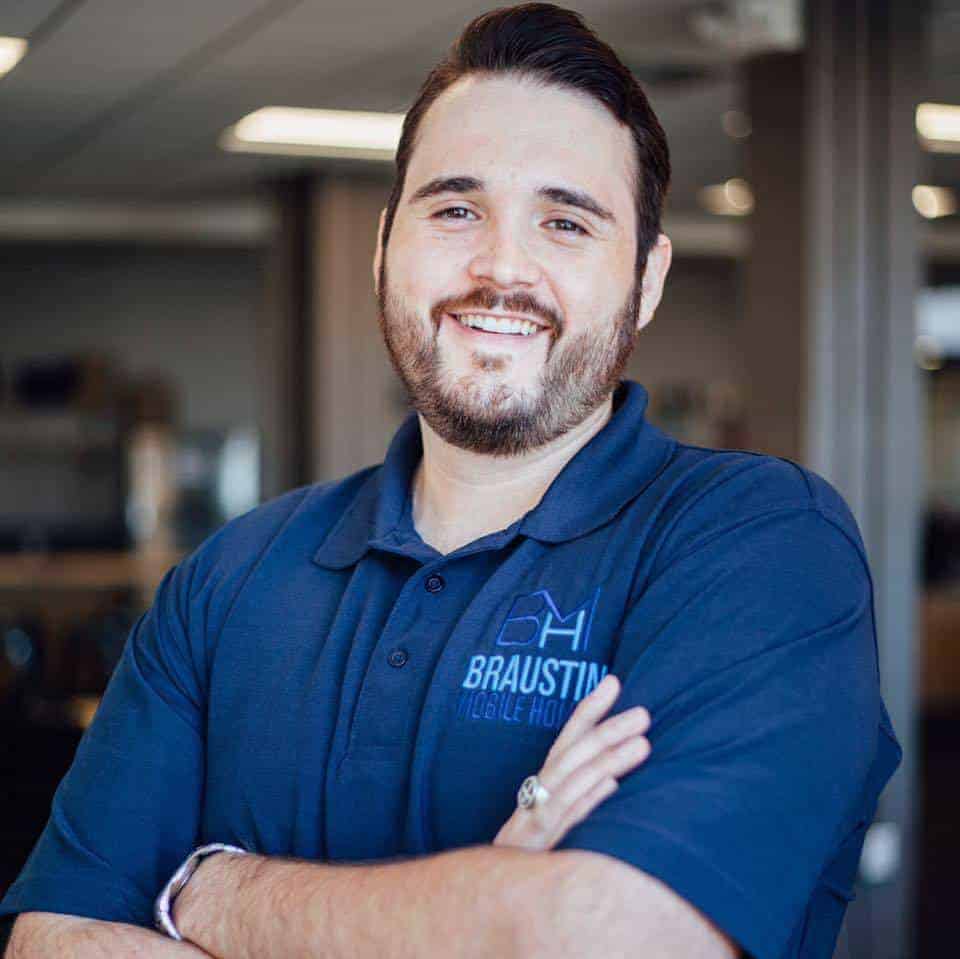 Jason’s Journey to Braustin: A “Meet the Team” Series

Over the coming weeks we will be getting to know a little more about the team behind Braustin Homes. First up, I got to speak with Jason Piña, the co-founder of and sales manager at, Braustin. We talked about everything from his background in mobile homes, family life, and the challenges of getting a start-up company off the ground.

Getting Started and Settled

Jason was born in San Antonio, TX kicking off his working career by making sandwiches at Thundercloud Subs, until later selling cell phones at a kiosk in North Star Mall (yeah, he was one of the guys you try to duck and run past to get from Sephora to Starbucks). After moving to The Valley at 21 years old, he even got his first taste of mobile home sales with a big-name dealership in the industry.

He then got a job doing commercial sales in The Valley (an area near South Padre Island), settled down with his wife, and they had their first child. Family life was good, his career was gaining momentum, and after fighting hard in the company, Jason received his long awaited promotion.

“I was incredibly excited for where I was,” he says.

The Moment Everything Changed

But it was only two weeks later that his brother, Jonathan, would be involved in a fatal accident, leading Jason to leave his job and return home to San Antonio, TX.

Jonathan, endearingly referred to by family as Jonny, played a huge role in the development of Braustin’s business model with their brother, Alberto, while developing an online based, upfront pricing centered division of an already well-established mobile home dealership in 2014.

“Jonny had spoke with me about what they were doing, and because of my experience with the other mobile home company, I had zero interest in it. I had told him I would never get back into this industry. I hated it.”

Above all, Jason knew he needed his family and they needed him, so he began working with his brother, Alberto, doing what he thought he wouldn’t. It didn’t take him long to realize that the business practices being utilized were not at all what he expected, from honesty with customers to selling them what they needed instead of what was most expensive.

After a year of working as sales manager, and becoming one of the top mobile home sales reps in the division Alberto and Jonathan had developed, the company fell on hard times, and Alberto was laid off just before Thanksgiving in 2016.

With another baby due in just a few weeks, Jason left the company after his brother.

“I came back to San Antonio, really, for my family. Whatever we were going to do, I was going to do it with AP.”

And so, after a lot of ideas and discussion, Jason and Alberto began the launch of Braustin Homes. (Read more about the Braustin Story here.)

And Jason admits being a business owner doesn’t mean work is easy and money isn’t tight.

What keeps him going, besides a lot of coffee and his beautiful family, is seeing people’s lives enhanced by the power of affordable home ownership.

“What we’re doing—it makes such a giant difference. No one else is really doing it and we’re really, really good at it.”

When asked what he wanted to see the Braustin family known for, his answer was simple and honest, an attitude we’ve grown to expect from Jason.

“Braustin is a company that’s ran by people exactly like the customers that we help. Down from the way we talk to people to the way we dress. We don’t try to make ourselves out to be someone above them. Our team’s just very, very down to earth. We know the people we’re trying to help and we genuinely love the people that we help.”

Jason is truly a big-hearted family man, putting in the hard work and long hours it takes to grow a business. He loves being in the outdoors in his down time (whenever that is!) but mostly he can be found at the office crunching numbers, speaking with home buyers, encouraging his sales team, and generally finding the work-life balance we all strive for.

To see more from Jason, check out this video on our Facebook page. While you’re there, make sure to follow us!