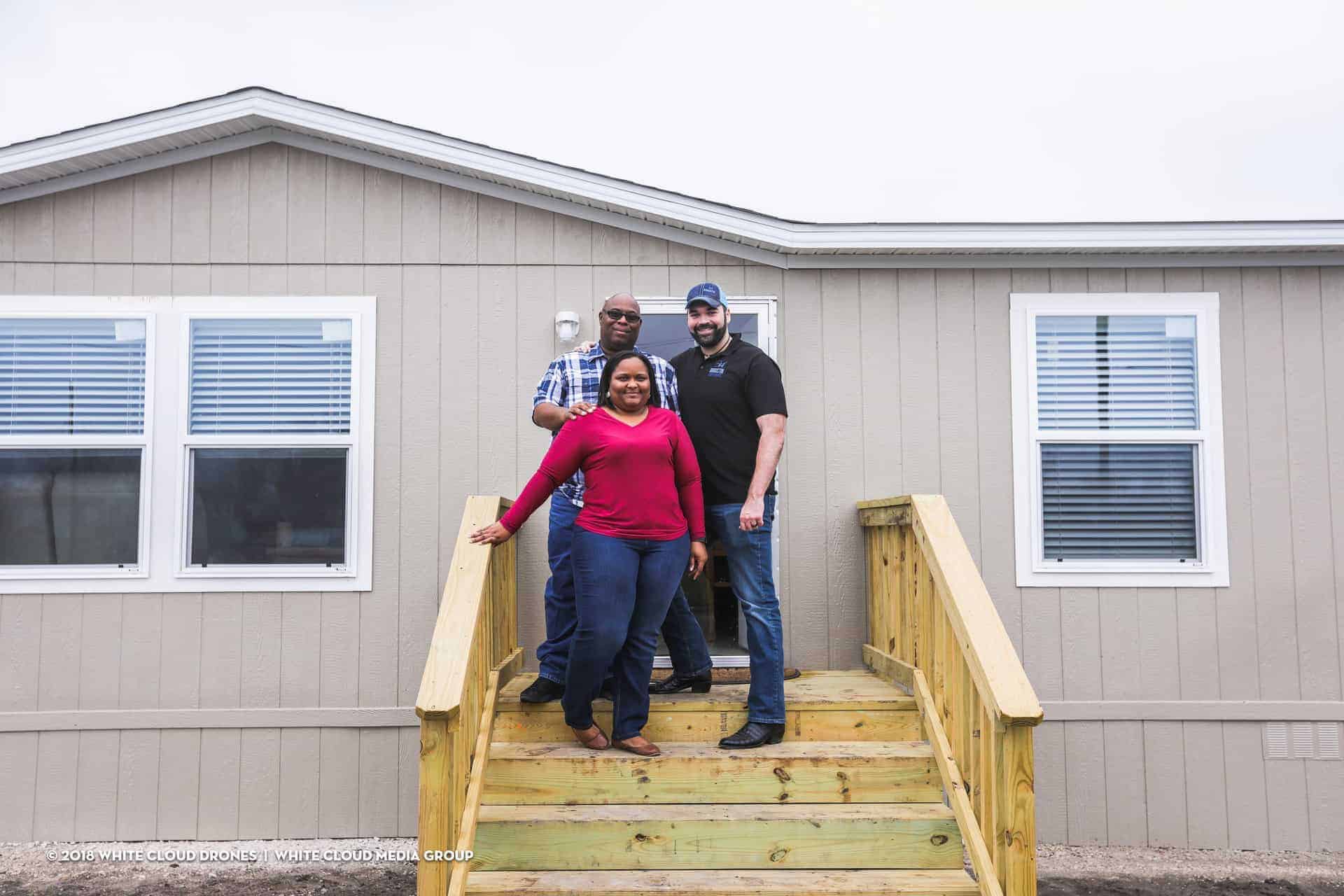 The Smith Family Loses Everything

The Smiths were just settling into their inherited family home—a home lived in over the years by Mr. Smith’s own parents and each of his ten aunts, uncles and their children; a special, priceless heirloom full of generations of laughter, love, and memories—now his to build a life in.

“We put a lot of money into the home, a little at a time,” Mr. Smith says in an interview with Braustin Homes founder and co-owner Alberto Piña. He looks up at the ceiling, seated in the kitchen of his new manufactured home, still in disbelief over the direction life took six months ago when Hurricane Harvey was declared a category 4 storm—the worst since 1961’s Hurricane Carla—and headed right for the Smiths in Refugio, TX.

“With Hurricane Harvey, it was something we didn’t take seriously at first because he was rooted here” Mrs. Smith says, glancing at her husband with tenderness, “He boarded the house before we left—in the rain when it was actually coming in—and I convinced him to leave.”

The Smiths evacuated for the storm, waiting out its passage in safety with family, but not without relentless worry over their home. They called and texted others in the community who had stayed behind, desperate for information. Desperate to know what the future held.

After four long days in a state of confusion and apprehension, they were finally able to return and lay eyes on their beloved home.

It was worse than they had originally thought and they quickly realized, though so dear to Mr. Smith and his family, the home couldn’t be saved.

“You build. And you try to establish something. And then all your work, all your money, all your time is just gone in a flash. That… that’s hard to deal with,” Mr. Smith says, swallowing hard, still maintaining his composure, “Just like that. Just in a flash. Just gone,” he continues, snapping his fingers and shaking his head sadly.

They made the difficult decision to have the home demolished—a decision clinched by the water still pouring from electrical outlets and other crevices throughout—and moved themselves and their four children into a relative’s guest room while they searched for a house to replace what they lost.

Moving Forward, But Taken Advantage Of

Five weeks passed and the Smiths visited every local manufactured home dealership they could, but hit obstacle after obstacle, from pushy salesmen to poor communication to price-gougers. They were in disbelief at the coldness of the industry, realizing they would have to be much more careful and guarded than they would have thought necessary.

Mr. Smith says he felt a clear message from these companies, “We don’t need you. You need us right now.”

“We did [credit] applications everywhere,” Mrs. Smith says, but, wary of overspending after losing their large home investment, she and her husband were uncomfortable exceeding the careful budget they had calculatedand felt the homes they looked at were unaffordable.

“This exact same home we’re in right now, they were trying to charge us about $20,000 more—

The Smiths stayed strong, aware the quotes they were receiving on mobile homes from the local dealers were far above market value. They refused to accept such poor service, especially in their time of need.

“It was just like we were forgotten about once we walked out the door,” Mr. Smith recalls.

“Those companies didn’t think about what we needed,” Mrs. Smith adds, “They were focused on what they wanted to sell us.”

The Smiths convey their anger and hurt at being taken advantage of while so anxious to find a new place for their family to call home. They kept searching.

Hope for the Smiths—When All Hope Was Lost

Everything changed when the Smiths submitted a Facebook inquiry to a new mobile home dealership and were contacted by Mauricio, a member of the Braustin Mobile Home team. They reflect on how different their first conversation with Mauricio was conducted compared to all their prior experiences.

“He didn’t tell us anything about any of the homes. He just talked to us,” Mrs. Smith says, smiling.

“He asked us what we want. What are you interested in? What do you like?” Mr. Smith emphasizes—questions that seem obvious for someone buying a home to answer but are uncommonly asked when a company is concerned more with profit than helping others first.

“At first we were trying to work him,” Mr. Smith laughs, “and we couldn’t outwork him. We were so used to waiting for calls and waiting for returns. We would ask a question and get a response within minutes to an hour, and we really didn’t know how to react to that.”

The Smiths both grin, fondly remembering their experience working with Mauricio, sharing anecdotes throughout the buying process of his communication, even going so far as to say he was “over available” when he surprised the pair by responding to a text message sent after 10 p.m.

“He never made us feel like we were just customers,” Mr. Smith says, looking to his wife.

“He made some true friends,” she confirms.

Of course, buying a home is never easy, even working with a company dedicated to communication and professionalism, and even under the best of circumstances. They discuss the high-stress atmosphere created by fear, close quarters, and long commutes, but say knowing they could contact Mauricio with any question or doubt was reassuring while waiting for their home’s construction to be completed.

“It’s a new beginning,” Mr. Smith says when asked how life is now that the home is theirs, conveying the bittersweet nature of happiness born from hardship.

“It’s peace,” his wife says. “Everything was so rushed and we had to think about the future. And now we can just enjoy.”

“After a long day, to come home—and actually say you’re home—there’s just no other feeling,” he adds.

Advice for Other Home Buyers

The Smiths complete their interview by offering advice to future manufactured home buyers.

“Be patient. Take your time. It’s a process. It’s not something you can do in a day,” Mr. Smith says, “really make sure, because once you make that investment, it’s a lifetime investment.”

“If you can trust someone that’s selling… don’t be afraid to ask questions,” Mrs. Smith adds earnestly, “because if they know what you need—because you told them—they’ll find it for you.”

Sound advice from two lovely people who have overcome disaster and demonstrated both Texan resilience and the healing power of a little compassion from a helping hand.

The Smith family is working to find their new normal, taking refuge from the exhaustion of instability, and relishing in the comfort of home.

Braustin’s team couldn’t be more honored to have helped them recover that innate desire for peace.