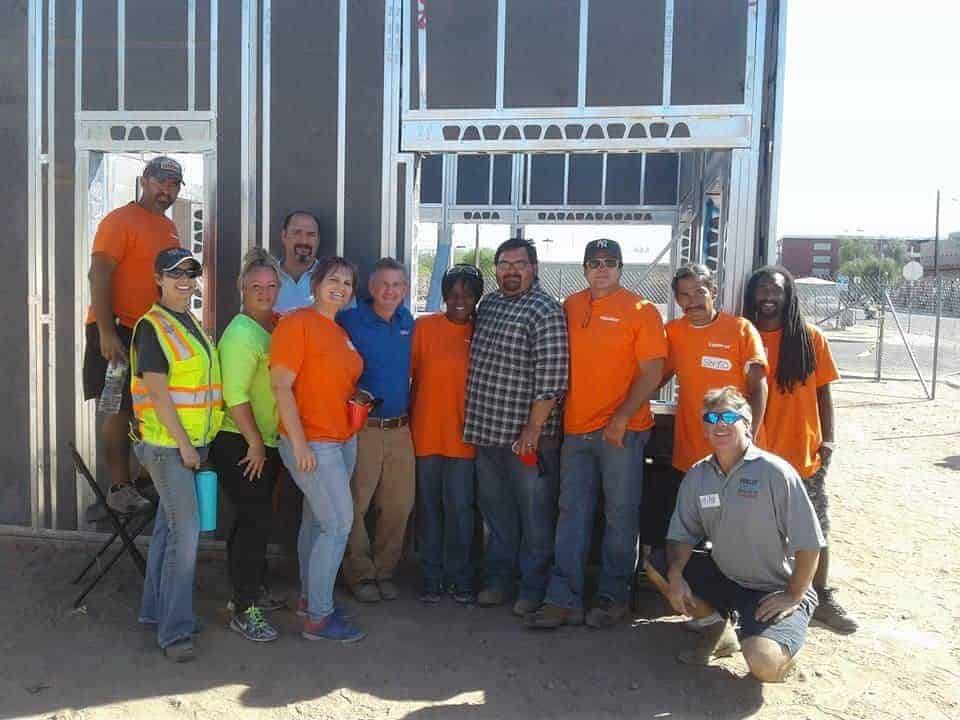 Elizabeth Singleton and her team at Build Us Hope take a picture in front of a newly build “tiny home.”

Build Us Hope: A Permanent Solution to Homelessness

In 2015, after announcing participation in The Mayor’s Challenge to End Veteran Homelessness, San Antonio increased its efforts to provide housing for the homeless veteran population in the city. A combination of local shelters and city provided services, however, produced only a 12 percent decrease in veteran homelessness from 2015 to 2016.

Officially named “The Military City” in March of 2017, San Antonio has greater responsibility than ever to lead the charge in caring for not only those who actively serve the country, but for those men and women who have already served and are left searching for their place in the world.

The efforts have been many. Volunteers, police officers, and city officials have come together. The earnest desire for change is apparent, but something is missing!

The inspiration for real change may just be found in the big dream of tiny homes in the heart of one woman all the way from Phoenix, Arizona.

Two years ago, Elizabeth Singleton founded Build us HOPE, a nonprofit organization dedicated to providing an affordable housing solution to the veteran, disabled, and mentally ill population in her city.

She faced various struggles, from convincing city officials of the project’s viability to creating a feasible system with the housing and zoning department conducive to smaller scale homes.

“It was emotionally and financially a struggle for me and the company,” Singleton tells Alberto Piña, president of Braustin Homes, during a recent interview for the “Doublewide Dudes” podcast, and she goes on to say, “but now we are at a place where we are leaving a legacy for others to be able build a tiny home.”

Because Singleton provides a model for housing options even more affordable than that of Section 8 provision, this story is especially pertinent for a city like San Antonio that has increasingly worked to eliminate veteran homelessness.

Singleton’s developments intentionally promote sustainability and camaraderie by positioning the homes around a community garden – a design potentially capable of providing the confidence and stability of home ownership, but also the support and friendship of individuals overcoming similar struggles.

“It’s nothing new,” Singleton says, “It’s not a trend. We’ve been living in small and tiny homes for centuries.”