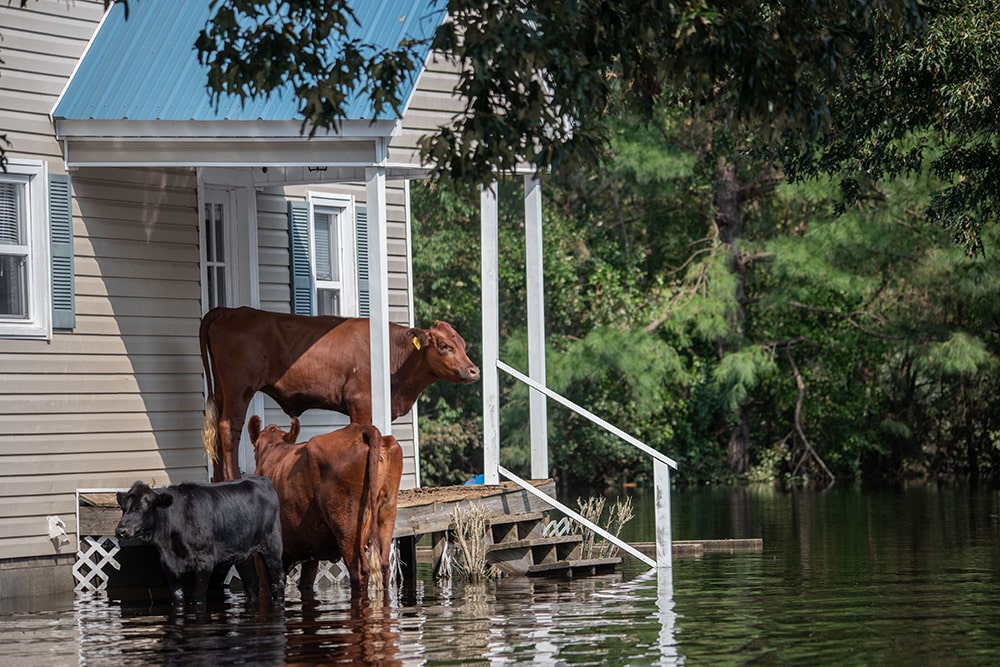 Can a Mobile Home Withstand a Hurricane?

Mobile Homes are more susceptible to damage during a hurricane than a traditional site-built home… FALSE!

You may see news stories featuring mobile homes caved in at the roof or torn to bits after any catastrophic storm, but in reality, what you’re seeing is a mobile home that was constructed well before the 90’s or what is being sold today.

So, to assume what is reported on the news during hurricane season is what you should expect with your brand-new mobile home is simply incorrect.

How can we be so sure? Well, let’s jump right in to share what we know!

Outdated stereotypes and the mistaken belief that modern manufactured housing is no different from the unregulated mobile homes of the 1960s and ’70s have created several persistent myths. The false narrative that continues to circulate, leads us to the topic we will discuss in this article.

Today we will cover mobile homes versus hurricane season.

Now, to come out and say, “mobile homes are absolutely hurricane proof” – would frankly be untrue. Unless it is built like a military bunker, no house is “hurricane proof.”

Yet, modern mobile homes have proven to withstand hurricanes as well as houses built to current day standards. You can find a weather-proof plan of action in one of our previous articles here.

The truth on the matter is…

Mother Nature is going to do her thing no matter what kind of home is in her path, and to that point – a modern mobile home is no more susceptible than a site-built home.

Let’s go back in time to truly understand the difference in the building standards that are demonstrated today.

The Impact of Hurricane Andrew

The year 1992 opened the eyes of many, when devastation was all that was left behind by the powerful Hurricane Andrew. When this Category 5 storm hit the coastline of Florida and continued in-land without skipping a beat, it caused entire neighborhoods of various houses including mobile homes to scatter, leaving them destroyed.

It was a realization that all manufactured homes were built to the exact same HUD standards across the board regardless of if they were going to be placed on the hurricane prone coastline of Florida or in a landlocked state like Nebraska. So, whether your home was residing in the wake of a hurricane or within the path of tornado alley, the houses were constructed under the same standards.

Hurricane Andrew was just too devastating to ignore, and the mobile home industry knew that change was in order.

By 1994, new regulations for manufactured homes were announced. The country itself would now be divided categorically into wind zones and homes were to be built according to the highest likely wind speeds within the area in which it was placed.

The advancements only continued from there, and now – here we are, nearly 27 years after that event. Within that amount of time, this industry has developed stronger building materials, abide by much higher standards in construction and thorough inspection.

To put things into perspective, let’s break it down to really understand why manufactured housing structure shouldn’t be feared during a storm.

When you hear the word mobile – what does that typically indicate?

So, with that in mind, a mobile home is constructed in order to withstand transport.

The homes are manufactured in a factory setting and then hitched up and moved miles upon miles – sometimes even across state lines. In order for these rigorous transports to be possible, the homes have to be built with quality assurance as they have to hold up against the elements during the move.

Think of it this way, when you travel during the holidays with your family, what are some common factors that you’ll encounter while on the open road?

A couple of things I can think of right off the top of my head would be:

These homes are built to be transported and withstand elements that a traditional site-built home would never typically experience. So, the quality in materials used to build these homes is remarkably high and inspected thoroughly.

A site-built home is inspected once it’s built and in-line to be sold. The inspections are typically completed by one person, who will cover the house from top to bottom.

Well, what if I told you that in some states, these inspectors do not require licensing?

Yes… that’s correct. Some states do not require licensed professionals to preform inspections on homes.

This same inspector, who is not specialized in one particular area of home regulations, is basically doing a once over check, starting from the roof, to the basement, to the electrical elements, all the way to the plumbing vessels and everything in between.

Mobile homes are inspected too… but here’s the stark difference…

The inspections done on manufactured homes take place during every step of the building process.

Well, what does that mean?

It means that quality control check points will catch any flaws right away and will be addressed and corrected before moving on to the next step in the building plan. These inspections aren’t mandated by the government, but by the manufacturers themselves to make sure that quality is kept as high as possible. Then, once the house is built, it will be given a final inspection just like a site-built home.

Mobile Homes are inherently stronger than site-built homes because of the superior processing as well as the way they are constructed. To put it simply, mobile homes, if secured properly are just as safe as site-built homes are during a storm.

Pleasant weather, bad weather, unexpected weather, and sometimes even damaging weather. It’s something we can’t avoid altogether, but we can, in most cases, be prepared for it.

It’s really not the home’s durability that you should be worried about, it’s the external elements like your old carport or your neighbor’s outdoor furniture that may not be secure. All things out of your control.

Ultimately, we want to both reiterate the safety and affordability of these homes, as well as acknowledge the fact that mother nature has a mind of her own. However, with proper installation, a safety plan, and the right precautions, you’ll be one step ahead.