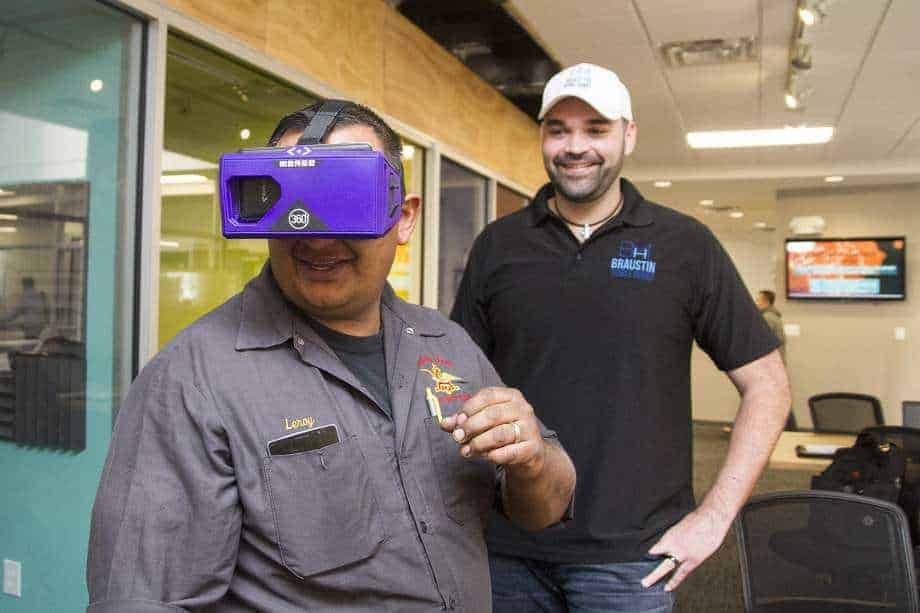 Inside the walls of the ultramodern Geekdom office space downtown, surrounded by hip techies and entrepreneurs, brothers Alberto and Jason Piña are focused on providing a basic type of housing that gets little respect — mobile homes.

Since launching Braustin Homes in January, the brothers are using virtual reality goggles, drones and e-commerce to provide customers a more progressive and consumer-friendly shopping experience than one typically encounters when buying a home.

Photo: Alma E. Hernandez /For The San Antonio Express-News – Leroy Chavez, a client of Braustin Homes, “tours” his future home using a pair of virtual reality goggles at the Geekdom office space in downtown San Antonio, while company President Alberto Piña watches. The company makes most of its sales online and over the phone.

The brothers’ goal is to put as many working people as possible into quality, affordable homes. They proudly proclaim they can do that at a price of $28 to $29 per square foot, while the average cost of new residential construction in San Antonio runs around $115 per square foot.

“Not everybody in our town can live in the Stone Oak area, you know,” said Alberto Piña, 31, the company’s president and co-founder. “I guess we just don’t think you need to be a six-figure earner to become a homebuyer in this city.”

Unlike some of their competitors, the Piñas post prices on their website for all of the mobile homes they sell.

Most of their sales are made online or over the phone.

“With the millennial generation being the dominant buying demographic in this space, we’re used to buying on Amazon or buying on eBay,” Alberto Piña said. “We just figured ‘Why not move that to the manufactured housing industry?’”

So far, Braustin Homes — a small operation with only four employees, including the Piña brothers — has sold 10 homes for a total of $546,273. The company expects to sell five more homes by the end of June.

“There aren’t too many lenders that loan on manufactured homes,” Alberto Piña said. “The ones that do, we have working relationships with.”

The Piñas’ company operates under a “virtual dealership” concept. Customers can use virtual reality goggles to tour the floor plans for different mobile homes and get a visual of what their home will look like once it’s finished.

This approach allows Braustin Homes to keep its overhead and its prices low.

“We’re consistently selling the same home from the same factory for $5,000 to $10,000 less just because we don’t have to pay for 50 (dealerships) across the state,” Alberto Piña said.

“I’m not sure if we’ll ever get to the point where we have a physical dealership. Because then that drives our overhead higher.”

While the company doesn’t target homebuyers of certain income levels, its customers typically have been low- to middle-income earners, the Piñas said. Many of them are buying a home for the first time.

“The majority of our customers are just the salt of the earth — blue-collar, hardworking people,” said Jason Piña, 29, the company’s vice president of sales. “With our upfront pricing, we really provide a different opportunity for them.”

Some customers have already chosen the land where they want to build their home when they approach Braustin Homes. Others ask the company to help them find land that will make a suitable homestead.

The Piñas hired White Cloud Drones, another company housed in the Geekdom office, to capture aerial footage of raw land being transformed into a home site complete with a foundation, water and septic services, electrical services and a driveway. That aerial footage will be made into an educational video for customers.

Braustin Homes also partnered with an investor who purchased a rundown mobile home park south of San Antonio off Texas 16. That space is being renovated into a place where customers can physically walk through stock models of mobile homes sold by the company. It will open next month.

The consumer experience becomes more important with larger purchases, such as buying a home, said Tony Ciochetti, a professor of finance and real estate at the University of Texas at San Antonio.

“People are making probably the biggest investment they’re going to make in their whole life — and they tend not to do that in a flippant mode,” Ciochetti said of buying a home.

Posting prices online is “a phenomenal marketing technique,” Ciochetti said. The drone usage brings a different perspective to the buying and selling process, he added. “That technology is creeping in everywhere,” he said.

All of the homes sold by Braustin Homes are made at a factory in the Central Texas town of Belton.

The Piñas say they’ve found their prices are most competitive in West Texas, where customers have told them other mobile home dealers are charging $20,000 more for the same home model.

“Our overall goal is just to help as many people as we can achieve the goal of homeownership … Get out of the rent race and build their own equity, get their own place,” Alberto Piña said.